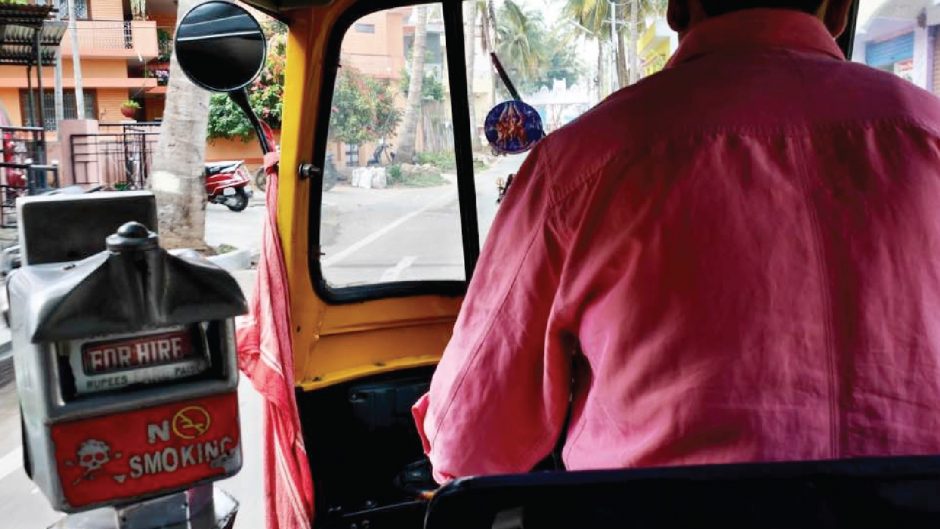 Coming to Mysore to practice and spending time here is one of my most favourite things, and if you make it here, I am quite certain it will be yours as well. If it’s your first time to Mysore or even to India, here are some suggested ways to make your trip a little bit smoother – at least when it comes to transport choices and getting around.

Upon landing in Bangalore, you will still need to find your way to the city of Mysore. You can consider the three options of train, bus or car.

There are a number of daily services running from Bangalore to Mysore. Go to either Bangalore City Junction or Bangalore Cantonment station, since these are the stations closest to the airport. From there, look for the services running to Mysore; there are quite a number, but the fastest one is the Shatabdi Express. This was how I made my way to Mysore on my very first trip and it will take you about two hours of travel time. The train departs from Bangalore City Junction at 11 am every day.  For more details, here is a good resource you can refer to: http://mysore.ind.in/bangalore-to-mysore-train-timings

There are several efficient bus services that ply the Bangalore – Mysore route and the most popular one is the FlyBus. It is super convenient because it departs from the airport itself and runs 10 times a day. You can essentially just show up at the bus stand, purchase a ticket and ride (or you could also book ahead from their website – http://www.ksrtc.in/oprs-web/)

Of the ways to get to Mysore, I always prefer the private car option. I find it to be the most convenient, comfortable, safe and stress-free way of getting here. If you are on a budget but would still like to hire a car, you can always share it with another person and split the costs. There is an Ashtanga Community page on Facebook that you can go to to do so.

If you hire a car, the driver will wait for you at at the airport and hold out a sign with your name on it. He’ll help you with your bags and you just hop in, sit back and relax for the rest of way. At approximately Rs3,000 – 5,000, this is also obviously the most expensive mode of getting here. There are many companies and individual operators who offer airport pick up services. The service I normally use is Sri Ganesh Travels.

Ganesh, the owner is very efficient and quick to respond to emails and Facebook messages. He runs his own network of reliable drivers that do the Bangalore – Mysore trip several times a day. Many flights land after midnight, and having a car and driver to get you from the airport oftentimes just makes the most sense. Especially something to consider for female travelers even if they’re arriving in a group. It’s nice knowing there’s someone waiting for you on arrival and to take you straight to your accommodation’s doorstep in Mysore. On the drive there, Ganesh and your driver will be in constant contact, giving each other updates as the trip progresses. Once you arrive, you will be taken to the night manager who coordinates all the drivers and cars coming to town. He will then ensure that you are sent to your doorstep safe and sound. To contact Ganesh to make your travel arrangements, you can call +919845279513 or email ganeshmysore@gmail.com

Getting Around in Mysore

Once you’ve arrived and settled in, you’ll need to figure out your way around town; like the best way to get to KPJAYI, the shops and eating places for starters.

Autorickshaws are a very convenient means to get around because, well, they’re always around! All you have to do is to go to almost any street corner and you’ll find them ready and waiting or it’l be a mere 2 minutes for you to hail one down. Tell them your destination, hop in and sit back. It can make for a fun ride as you watch your auto driver dodge traffic, reinterpret traffic rules and defy physics as he takes corners at speeds you would not consider possible!

The auto-rickshaw drivers do however have a tendency to not turn on the meter, and instead quote you a fixed fare, on which you might need to haggle about. To me, this is  the most unpleasant part of things. But after a while, you sort of start getting an idea of what is a fair price to get from say the shala to your accommodation and then you won’t have to haggle anymore. You just hop in and pay them the fare at the end of the trip; the question of ‘how much?’ does not even come up.

Alternatively you can always insist they put on the meter and pay accordingly. The only issue with this is that auto-rickshaws who are waiting for customers at the same street corner may refuse and other drivers may follow suit, leaving you with no rickshaws to take. So if you want the meter on, simply hail a rickshaw from the street instead of going to the ones that are already waiting.

On the plus side, when you hire a rickshaw, you can have them wait for you to take you back. Pretty useful if you know approximately how long you’re going to be and don’t want to be without transport for the return trip (especially if you are in an unfamiliar part of town).

Uber is in Mysore!

Probably the most convenient and cost-effective way of getting around town, Uber is oftentimes actually cheaper than taking a rickshaw. It operates exactly the same as in every other country, where you whip out your smart phone, order a car and wait for it to arrive. You can also choose to pay via cash if you prefer. The only issue that could possibly hold you up is the local mobile network. I’ve had some friends have trouble getting the app to work when using their mobile data connection, though it works fine over Wifi, so I guess your mileage will vary 😉

Another on-demand ride-hailing service that you can try is Ola Cabs. It is a local service that works essentially the same way as Uber and allows you to book a ride via an app.

One final option you could consider is renting a scooter. Having your own personal transport is invaluable especially when you have to make it to practice at 4.30 am! Also, it will accord you greater freedom and choices in where to stay, since it does not need to be within walking distance of the shala.

Do note however, that this option, is not for the faint of heart. Traffic conditions in India are probably very different from what you might be used to. All manner of vehicles use the road and it’s miraculous how they manage to avoid each other. Honking constantly is the norm and expected behaviour. Oh yes, there are also cows lounging in the middle of the road that you need to avoid, and occasionally dogs you need to speed away from plus the ‘invisi-speed-humps’ (they’re essentially unmarked / unpainted speed bumps) peppered all over town just waiting to catch you by surprise.

Don’t let any of the above deter you though! The freedom of being able to go anywhere you want at any time is literally priceless. There are there quite a few ways to get your hands on a scooter, and the agent who organised your accommodation for you, your landlord or even some of the cafe owners will be able to hook you up.

Next time, I’ll share some other tips to getting settled in to the life of an Ashtangi in Mysore!

Nadira Mohsin is a Singapore based KPJAYI authorised ashtanga yoga instructor. Having practiced yoga for well over a decade under the tutelage of Sharath Jois at the K. Pattabhi Jois Ashtanga Yoga Institute in Mysore, India, she today leads a team of teachers at Singapore's Art of Yoga.